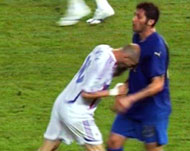 "Coup de Boule", the French for head-butt, was written after France's defeat by Italy on Sudnay. Zidane, widely regarded as one of the finest footballers of his generation, was sent off for head-butting Materazzi after an exchange of comments. [+] Link