British PM urged: Stand up to
Bush an 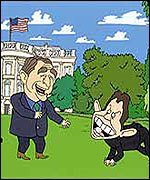 d call for ceasefire
Tony Blair will face fresh pressure over the Middle East crisis today when he arrives in Washington to meet President George Bush. Senior Downing Street aides said the two leaders intended to show the world they were seeking an urgent end to the hostilities in Lebanon, despite the failure of the much vaunted Rome summit on Wednesday to deliver a unified call for a truce.

Israel's Justice Minister, Haim Ramon, added to the pressure yesterday, when he interpreted that indecision as a green light to continue the bloody assault on Lebanon.
"We received yesterday at the Rome conference permission from the world... to continue the operation," he told reporters.

The Prime Minister's visit takes place as 42 leading figures in politics, diplomacy, academia and the media put their names to a declaration urging Mr Blair to tell the President that Britain "can no longer support the American position on the unfolding humanitarian catastrophe in the Middle-East". Their declaration, printed on the front page of today's Independent, calls on the Prime Minister to "make urgent representations to Israel to end its disproportionate and counter-productive response to Hizbollah's aggression". [+] Link Independent