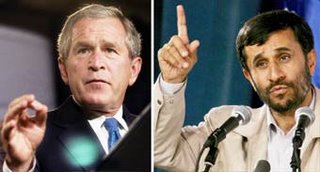 dinejad offers Bush TV debate
Ahmadinejad said the debate should be uncensored
The Iranian president has challenged his US counterpart to a live television debate.
Mahmoud Ahmadinejad made the offer to George Bush on Tuesday. Thursday is the deadline set by the UN Security Council for Iran to suspend all uranium enrichment and reprocessing activities, and Iran faces possible sanctions if it fails to comply.
Ahmadinejad said: "I suggest we talk with Mr Bush, the president of the United States, in a live television debate about world issues and ways out of these standoffs.
"We would voice our opinions and they would too. The debate should be uncensored, above all for the American public." The White House called the aggrestion a "diversion" from the thursday deadline and refused the invitation. [+] Source : Link
Related:
Iran launches new nuclear project
US: Iran's response falls short
Iran nuclear response 'by August'
GCC seeks Iran nuclear guarantees
US sceptical of Iran nuclear deal