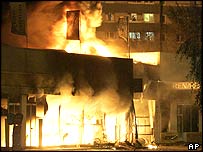 Rioting youths opened fire on police and set dozens of vehicles ablaze in a seventh night of violence in Paris. In escalating unrest, shots were fired at police and firefighters, while gangs besieged a police station, set fire to a car showroom and threw petrol bombs. At least 15 people were arrested and nine injured across north-east Paris.

France's government is facing mounting criticism of its handling of the riots, triggered by the deaths last week of two teenagers of African origin. Bouna Traore, aged 15 and Zyed Benna, 17, were electrocuted at an electricity sub-station. Local people say they were fleeing police during a disturbance, a claim the authorities deny.
+++ ++ +++
[+] Link Via Bbc.news