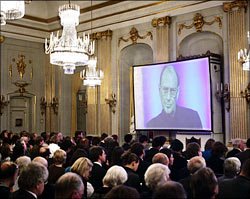 Pinter: Iraq war act of state terror
"The crimes of the United States have been systematic, constant, vicious, remorseless, but very few people have actually talked about them" Harold Pinter
UK dramatist wins Literature Nobel
In a fierce critique ahead of the Nobel awards ceremony, literature laureate Harold Pinter has branded the war on Iraq "an act of blatant state terrorism" and has demanded the prosecutions of US President George Bush and Britain's Tony Blair.
"The invasion of Iraq was a bandit act, an act of blatant state terrorism, demonstrating absolute contempt for the concept of international law," Pinter said in a pre-recorded lecture broadcast by the Swedish Academy on Wednesday.

The Academy, which awards the Nobel Literature Prize, aired the interview, recorded on Sunday in London, because Pinter was too sick to travel to Sweden for the lecture or pick up the award in person at Saturday's ceremony.
"How many people do you have to kill before you qualify to be described as a mass murderer and a war criminal?" Pinter asked.
"One hundred thousand? More than enough, I would have thought. Therefore it is just that Bush and Blair be arraigned before the International Criminal Court of Justice," he added.

The 75-year-old British playwright was diagnosed with oesophageal cancer in December 2002.

Criticism
In the recording made in London, he used nearly his entire lecture of almost an hour to criticise the US.
[+] Link Aljazeera.net