Ahmadinejad: Holocaust a myth
Ahmadinejad has caused outrage in
Washington and Jerusalem
Mahmoud Ahmadinejad, the Iranian President, has again caused international outcry by repeating his view that th 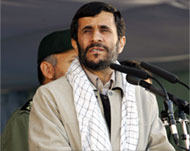 e Holocaust was a myth.

In a speech broadcast live on state television on Wednesday, Ahmadinejad told a crowd in the southern city of Zahedan: "They have fabricated a legend under the name Massacre of the Jews, and they hold it higher than God himself, religion itself and the prophets themselves.
"If somebody in their country questions God, nobody says anything, but if somebody denies the myth of the massacre of Jews, the Zionist loudspeakers and the governments in the pay of Zionism will start to scream," he said.Responding quickly to the comments, Israel urged the international community to "open its eyes" to the Iranian regime and its nuclear programme.
"We hope these extremist comments by the Iranian president will make the international community open its eyes and abandon any illusions about this regime," Foreign Ministry spokesman Mark Regev told AFP.

"The comments are wholly unacceptable and we condemn them unreservedly. They have no place in civilised political debate," said Alexander, whose country currently holds the EU presidency.

Speaking in Strasbourg to the applause of European parliamentarians, he said that "the presidency has been unequivocal in its condemnation of the comments attributed to President Ahmadinejad of Iran."
[+]link Aljazeera
Lea más noticias relacionadas
Ahmadinejad defends anti-Israel tirade
Ahmadinejad: Crash dead are martyrs
Israel slams 'dangerous' Ahmadinejad
Anger over Iran 'move Israel' remark

It wll change your life forever. :)