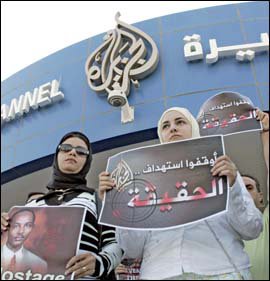 By Ahmed Hamidan (Morocco TIMES)
Qatar -- Al-Jazeera personnel in Doha and overseas bureaus staged protest on Thursday to denounce a leaked British government memo published by the UK-based newspaper, The Daily Mirror, which suggested that US President George Bush sought to bomb Aljazeera.

The Aljazeera staff organised a symbolic sit-in in front of the headquarters of the channel in Doha and its overseas bureaus to protest against this news, while some 100 of the channel's journalists and employees signed a petition calling on the broadcaster's board of governors to hold an official inquiry into the allegations.The Aljazeera staff also demanded an immediate end "to attacks and incitement against the channel and its employees" and called for "the opening of an inquiry into the bombing of its offices in Kabul and Baghdad".
+++ ++ +
[+] Link+ Morocco Times