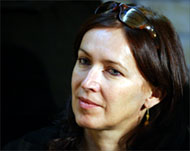 "Do not be afraid. We do not harm women or children and you are a Muslim," she quoted them as saying. "I was so happy to know that I had not fallen into the hands of criminals." Osthoff, a Muslim convert and Arabic speaker, said her captors demanded German humanitarian aid for Iraq's Sunni Arabs and stated clearly that they did not want a ransom.

"They said we don't want money ... Maybe we want from Germany ... hospitals and schools in the Sunni triangle [area northwest of Baghdad], and they would like to get money in the form of humanitarian aid." She described her captors as "poor people" and said that she "cannot blame them for kidnapping her, as they cannot enter [Baghdad's heavily fortified] Green Zone to kidnap Americans."

Treated well
She said she lived with her captors in a clean place and that they treated her "well". But she repeated more than once that she "was sold", without making clear what she meant, while expressing her shock at Berlin's failure to contact her captors.

Osthoff, 43, and her Shalid al-Shimani, her Iraqi driver, were seized on November 25 in the northwestern Nineveh province of Iraq. She was freed on December 18, as was her driver.