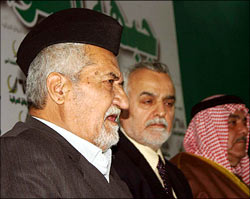 Dozens of Sunni Arab and secular Shia groups have threatened to boycott Iraq's new legislature if complaints about election fraud are not reviewed by an international body.
A joint statement issued on Thursday by 35 political groups that competed in last week's elections said the Independent Electoral Commission of Iraq, IECI, which oversaw the ballot, should be disbanded.
It also said the complaints about fraud and intimidation should be reviewed by international organisations such as the United Nations, the European Union, the Organisation of the Islamic Conference or the Arab League.
Reading from a statement, Ali al-Timimi, the head of the secular Shia Hilla al-Fayha List, said: "We hold the IECI responsible for all the violations which took place during the elections and demand that it be dissolved and a suitable alternative to be found.
"If this is not achieved, then we will have no choice but to refuse the results and boycott the new parliament."
A representative for Ayad Allawi, the former prime minister of Iraq, dismissed the voting in all of Iraq's 18 provinces on 15 December as "fraudulent".
Ibrahim al-Janabi also described the elected lawmakers as "illegitimate".
"These elections are fraudulent, they are fraudulent, and the next parliament is illegitimate. We reject all this process," al-Janabi told a news conference.
The groups that signed the joint statement included the main Sunni Arab coalition, Adnan al-Dulaimi's Iraqi Accordance Front, and a secular Shia bloc headed by Allawi.
[+]Link Aljazeera.net
*Related:
Iraq announces initial election results
Iraq elections: Parties to watch
Iraq elections: Key players