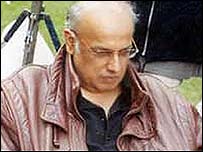 Bhatt has a reputation for making "controversial" films...One of Bollywood's leading producers, Mahesh Bhatt, is making a film inspired by last year's London bombings.
The film, Suicide Bomber, is about a disenchanted British Asian Muslim from Bradford and is set in the UK and India.Mahesh Bhatt says his film will seek to spread the message that Islam is a religion of peace and compassion.Bhatt has a reputation for making films on controversial subjects and will direct the film himself.

He says he thought of making the film in the aftermath of the 11 September attacks on New York's World Trade Center "when Islam was being projected as a barbaric faith in the West".

["As I have understood Islam, it's a religion of peace. It talks about mercy and compassion," he says.The account of a young British Asian Muslim, whose suicide mission failed, following the July 7th suicide bombings... inspire.d me to do a film on the subject..]
(Mahesh Bhatt)

Bhatt blames the US for terrorism and suicide bombings in the Islamic world.

He says that through his film he wants to demonstrate that "state terrorism by the West is the root cause of the birth of a suicide bomber".

"In my film, suicide bombers will be shown to be defaming true Islam," he adds.

Bhatt's protagonist subscribes to a radical ideology to kill himself and others in the name of Allah. But he fails in his mission and flees to India where circumstances lead to him beginning to question suicide bombings.

The lead role will be played by Bhatt's 21-year-old son, Rahul.
Filming will start in July and it will be ready for release in December.
Bhatt, who is known to speak out on issues close to his heart, has been a staunch opponent of the war in Iraq.
Lea [+] BBC News/Mahesh Bhatt