Al-Qaida's deputy leader says recent hints by American officials of a troop reduction in Iraq are a victory for Islam.
In a videotape, excerpts of which were aired by Aljazeera on Friday, Ayman al-Zawahiri was apparently referring to recent comments by Donald Rumsfeld, the US defence secretary, who on 22 December hinted that the US military will soon begin reducing its tro 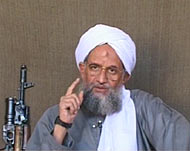 "I congratulate my nation and bless Islam's victory in Iraq," he said.
"Oh my Muslim brothers, I told you more than a year ago that the pullout of America's troops from Iraq would be a matter of time and Americans are now begging to leave and negotiate with the mujahidin.
"Bush, the liar, was forced to announce in November 2005 that he would withdraw his troops from Iraq.
"Since Bush is addicted to lying, he justified his withdrawal by saying that Iraqi forces have become well-trained. But he did not set a timetable for the pullout.
Via[+]Link Aljazeera