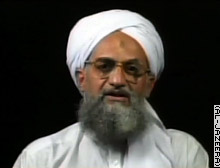 xt translated...
Al-Zawahiri said he survived the 13 January US air strike
Aljazeera has aired a new video in which al-Qaida's deputy leader Ayman al-Zawahiri calls George Bush a butcher and threatens a new attack in the US.
Monday's video was his first appearance since a US air strike that targeted him on 13 January in Pakistan.
Al-Zawahiri said he had survived the raid which he said killed "innocents".
"The American airplanes, in collaboration with their agent of the Jews and the Crusaders, Musharraf, launched an airstrike on Damadola near Peshawar around the Eid al-Adha holiday, during which 18 Muslims -- men, women and children -- died in their fight against Islam, which they call terrorism. Their claim was to target this poor man and four of my brothers. The whole world discovered the lies as the Americans fight Islam and the Muslims. Before I discuss this incident, I have some messages to send out.

"My first message is to the butcher of Washington, Bush: You are not just defeated and lying about it, but you are, with God's help, a loser. You are bad luck to your people. You brought them disasters and catastrophes, and you will bring them even more disasters.

"Bush, you failed crusader, know that we are the nation of monotheism, which believes that no one is greater than God. He sent us a prophet and a book that was never edited like the other books before it. A unique book that defies anyone to come up with anything like it.

"I will meet my death when God wishes. But if my time hasn't come, you and all the Earth's forces can't change it, not even by a second.

"Bush, do you know where I am? I am among the Muslim masses enjoying their care with God's blessings and sharing with them their holy war against you until we defeat you, God willing.

"My second message is to the American people who are drowning in illusions. I tell you that Bush and his gangs are shedding your blood and wasting your money in frustrated adventures. The lion of Islam, Sheikh Osama bin Laden, offered you a decent exit from your dilemma, but your leaders, who are keen to accumulate wealth, insist on throwing you in battles and killing your souls in Iraq and Afghanistan and, God willing, on your own land.

Does this man, or Bin Laden, really have any mor juice in world events? Has this man went the way of the pet rock? Many believe so, so why should we care what he says? Is there any relevance?
Raymond B
www.voteswagon.com

Is this joker even relevant any longer? I know he was at one point but now I think he, and Bin Laden, are useless to theri cause. I think they have been marginalized, their story is more snesational than it problay is meaningful.
Raymond B
www.voteswagon.com