Nothing can obscure what WikiLeaks has told us

Every one of us owes a debt to Julian Assange. Thanks to him, we now know that our governments are pursuing policies that place you and your family in considerably greater danger. Wikileaks has informed us they have secretly launched war on yet another Muslim country, sanctioned torture, kidnapped innocent people from the streets of free countries and intimidated the police into hushing it up, and covered up the killing of 15,000 civilians – five times the number killed on 9/11. Each one of these acts has increased the number of jihadis. We can only change these policies if we know about them – and Assange has given us the black-and-white proof. 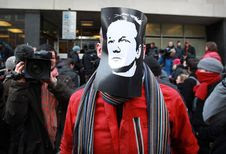 Each of the wikileaks revelations has been carefully weighed to ensure there is a public interest in disclosing it. Of the more than 250,000 documents they hold, they have released fewer than 1000 – and each of those has had the names of informants, or any information that could place anyone at risk, removed. The information they have released covers areas where our governments are defying the will of their own citizens, and hiding the proof from them.

Here’s some examples. The Obama administration has been denying that it has expanded the current “war” to yet another country, Yemen. Now we know that is a lie. Ali Abdulah Saleh, the Yemeni dictator, brags in these cables to a US diplomat: “We’ll continue to say the bombs are ours, not yours.” The counter-insurgency expert David Kilcullen, who until recently was a senior advisor to General Petreaus in Iraq, estimates that for every one jihadi killed in these bombings, they kill fifty innocent people. How would we react if this was happening in Britain? How many of us would become deranged by grief and resolve to fight back, even against the other side’s women and children? Bombing to end jihadism is like smoking to end lung cancer – a cure that worsens the disease... Read More