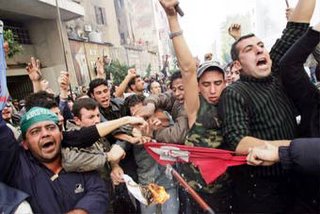 The taboo on picturing the prophet
By Humayun Chaudhry
A series of newspaper cartoons depicting the Prophet Muhammad have caused widespread anger in the Muslim world and sparked a fierce debate - among Muslims and non-Muslims alike - on the limits and responsibilities of free speech.
At the core of the row is the Islamic tradition which holds that any depiction of the prophets is sacrilegious.
Muhammed plays a central role in the faith of more than 1.3 billion Muslims worldwide. His status as a messenger of God makes him second only to Allah himself within the faith.
Whilst the Quran, the Islamic holy book, does not explicitly prohibit the depiction of human figures, Muslims understand certain Quranic verses as meaning that Allah and His prophets cannot be captured in an image by human hand - such is God's grandeur.
Any such attempt, the understanding goes, only leads towards idolatry, where the representations themselves can become the object of worship.
There are also references in the Hadith (the sayings of the prophet) prohibiting pictorial art or any depiction of the Divine.
OffenceWithin Islamic history there have been periods where certain pictorial representations existed or even flourished.
During the Sunni Ottoman empire, for example, many artists depicted the prophet but with his face covered, either with a veil or as featureless with emanating light. Leer [+] Link
*Leer artículos relacionados
Who said what in the cartoon row
Cartoon protests rage in the Middle East

hi there! I take it you are a muslim (but even if you are not), what do YOU think of the events?
would you allow the printing of the cartoons?