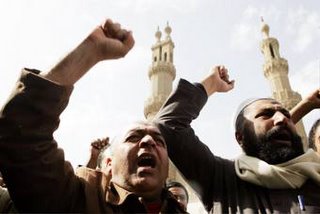 Muslim Furor Over European Muhammad Cartoons
Muslims across the Arab world are protesting against European publications that have published cartoons depicting Muhammad. "Newspapers in France, Germany, Italy, Spain, Norway and Switzerland have run some or all of the cartoons first commissioned by Jyllands-Posten's culture editor, Flemming Rose. It is apparent that the demonstrations are the biggest, and the diplomatic reactions the most vehement, in countries where authoritarian regimes are under domestic pressure from Islamist opposition forces." The Guardian (UK) 02/03/06
----------------------------------------
The Observer (UK)
The increasingly bitter row over the publication of a series of controversial cartoons of the Prophet Mohammad reached a new intensity last night as protesters set fire to the Danish and Norwegian embassies in Syria.
With police signalling that they will launch an investigation into the behaviour of protesters in London who called for those insulting Islam to 'be beheaded', protesters in the Syrian capital, Damascus, defied tear gas and water cannon to enter the Danish embassy and replace that country's flag with another which read: 'No God but Allah, Mohammad is His Prophet.'
Last night the Danish embassy, which was empty when attacked, was a charred hulk. The Norwegian embassy was still burning. As well as the dramatic scenes in Damascus - not known for its Islamic militancy - rising tensions among Muslims over the publication of 'blasphemous' cartoons in Denmark threatened to boil over across the globe.