Journalist Atwar Bahjat killed in Irak Attack
The bodies of three Iraqi journalists, including a well-known correspondent for Al-Arabiya television, have been found near Sam 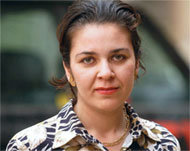 Al-Arabiya's Atwar Bahjat and two colleagues from the local Wassan media company, engineer Adnan Khairullah and cameraman Khalid Mahmoud, were in the city to cover the bombing on Wednesday of a revered Shia shrine.

Their employers lost contact with them on Wednesday night.
Their bullet-riddled bodies were found on Thursday morning near their vehicle, cameras and satellite dish on the outskirts of the city, 95km north of Baghdad, police Captain Laith Muhammad said.
[+] Link Al Jazeera